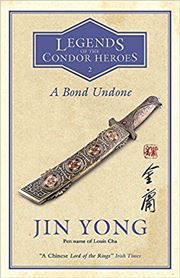 A Bond Undone (Legends of the Condor Heroes 2)

Details
THE CHINESE 'LORD OF THE RINGS' - NOW IN ENGLISH FOR THE FIRST TIME.
THE SERIES EVERY CHINESE READER HAS BEEN ENJOYING FOR DECADES - 100 MILLION COPIES SOLD.

In the Jin capital of Zhongdu, Guo Jing learns the truth of his father's death and finds he is now betrothed, against his will, to two women. Neither of them is his sweetheart Lotus Huang.

Torn between following his heart and fulfilling his filial duty, he journeys through the country of his parents with Lotus, encountering mysterious martial heroes and becoming drawn into the struggle for the supreme martial text, the Nine Yin Manual. But his past is catching up with him. The widow of an evil man he accidentally killed as a child has tracked him down, intent on revenge.
Meanwhile, his true parentage at last revealed, Yang Kang, the young prince Guo Jing must face in the Garden of the Eight Drunken Immortals, is forced to choose his destiny. Will he continue to enjoy the life of wealth and privilege afforded to him by the invader of his homeland, or give up all he has known to avenge his parents?
About Author
Jin Yong (pen name of Louis Cha) is a true phenomenon in the Chinese-speaking world. Born in Mainland China, he has spent most of his life writing novels and editing newspapers in Hong Kong. His enormously popular martial arts novels, written between the late 1950s and 1972, have become modern classics and remain a must-read for young readers looking for danger and adventure. They have also inspired countless T.V. and video game adaptions. Estimated sales of his books worldwide stand at 300 million, and if bootleg copies are taken into consideration, that figure rises to a staggering one billion. International recognition has come in the form of an O.B.E. in 1981, a Chevalier de la Légion d’Honneur (1992), A Chevalier de la Légion d’Honneur (2004), an honorary fellowship at St Antony’s College, Oxford, and honorary doctorates from Hong Kong University and Cambridge University, among others.