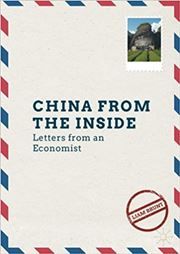 China from the Inside: Letters from an Economist

Details
This book delivers the fascinating account of one Western family’s time living and working in China. Told through a series of letters, China from the Inside: Letters from an Economist presents insights into the society and economy of a country that is often opaque to outsiders and poorly understood. The author’s expertise as an economist, and the family’s efforts to integrate into Chinese society, furnish a vivid and unique account. It provides a valuable new perspective on the Chinese worldview, social relations and economy, as well as informed opinion on its projected economic development. Addressing issues ranging from the education system to the sustainability of economic growth, this is an accessible and engaging book that will be essential reading for all those interested in China and its future.
About Author
Liam Brunt is Professor of Economics at the Norwegian School of Economics, Norway. Brunt spent spring 2016 on sabbatical in China, where he and his family were based in Beijing from January to August but also travelled widely. His research interests include Chinese economic history, the modern Chinese economy and business in China.