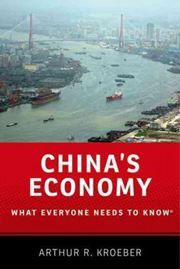 China's Economy : What Everyone Needs to Know

Details
China is on track to exceed the United States as the world's largest economy in the next several years. It is already the leading global trading nation. Even though its growth rate has recently slowed from years past, China has had the fastest yearly growth rate of any country for much of the last three decades. In China's Economy: What Everyone Needs to Know, Arthur Kroeber offers an overview of the highlights of China's development since economic reforms were initiated under Deng Xiaoping in 1979. He argues that manufacturing, agricultural change, and construction reoriented the economy in the 1980s and 1990s through state-owned enterprises, private entrepreneurship, and foreign investment. Those shifts unleashed perhaps the largest migration ever in world history from rural areas to urban centers, accompanied by a no less unprecedented expansion of infrastructure. Changes in the country's fiscal and financial systems vastly increased China's monetary holdings from the 1990s onwards, leading to the country's strategic holding of more U.S. debt than any other nation. Kroeber also examines economic growth as it has been experienced by Chinese workers and consumers, including the mounting problems of income and wealth inequality, corruption, and environmental degradation. Kroeber ultimately turns to the consequences of Chinese economic growth: its decisive impact on the world economy, its visible and challenging resource extraction from Africa and Latin America, and its increasing engagement with global economic institutions.
About Author
Arthur R. Kroeber is Nonresident Senior Fellow of Foreign Policy at Brookings-Tsinghua Center. Kroeber focuses on China's political economy and its engagement with global economic institutions. He is managing director of GaveKal Dragonomics, an independent global economic research firm, and editor of its journal China Economic Quarterly. He is based in Beijing, where he has lived since 2002. Before joining Dragonomics, Kroeber worked for 15 years as a financial journalist and economic analyst in China, Taiwan and India. He has written for Foreign Policy, Economist, Far Eastern Economic Review, Fortune, and Wired and is a contributor to the opinion pages of Financial Times, Wall Street Journal and Washington Post. He is a member of the National Committee on United States-China Relations, the Fernand Braudel Institute of International Economics and the board of the Research Center for Chinese Politics and Business at Indiana University.