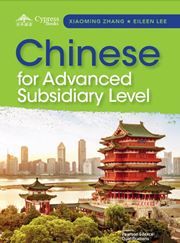 Chinese for AS (Simplified characters)

Chinese for Advanced Subsidiary Level is a textbook designed to meet the requirements of the 2017 reformed A Level exam. It is suitable for use by first-year students of the full A Level course, as well as those who study AS as a separate qualification. This book can also be used for the Pre-U, IB, and HSK exams, and as additional reading materials for students of Chinese at university level.

★Thematic chapters in the first four Units each of which gives a background introduction of the sub-themes covered;
★All introductions are presented in both Chinese and English for ease of comprehension;
★Information about Chinese culture and society is incorporated into the chapters to provide additional reading material as well as to enrich the student’s knowledge of the Chinese-speaking world;
★Each chapter provides exercises in all four language skills, translation, and grammar;
★The specified films and literary texts are introduced in Units 1 – 4 early in the school term so as to familiarise the students with their contents, enabling them to establish a link with the sub-themes;
★The passages and listening exercises of each chapter are recorded in both Mandarin and Cantonese and are available to download online;
★Separate versions for simplified and traditional scripts.
About Author
Xiaoming Zhang BA, has over thirty five years of experience in teaching Chinese both in China and the UK. She was one of the first university graduates after the resumption of university entrance exams at the end of the Cultural Revolution. She obtained a BA in Chinese Language and Literature from Shanghai Normal University. After graduation, she worked in a prestigious high school, and then in a college in Shanghai. Later she became a lecturer in Chinese language and literature before coming to the UK. She has been teaching Chinese as a foreign language in Wycombe Abbey School for nearly twenty years and helped the school to establish the successful Chinese Department. Apart from her publications and teaching awards obtained in China, in 1997 she co-authored Basic Chinese: A Grammar and Workbook and Intermediate Chinese, both published by Routledge. In 2006 and 2007 Xiaoming authored Chinese for A Level published by Cypress Book Company UK Limited in both traditional and simplified Chinese scripts. In the following year she co-authored Chinese for AS, again published by Cypress Book in both Chinese scripts. She also published many articles about Chinese teaching and research in the overseas edition of the People’s Daily, and Chinese Learning and Teaching magazines. Eileen Lee BSc, PGCE, is a qualified teacher in Britain in the upper primary sector (aged 7-13). She taught Chinese first as a mother tongue, then as a heritage language in complementary schools for many years. With the teaching experience obtained in mainstream schools, she adapted the relevant practice to apply to complementary Chinese schools. She has taught at different levels and has prepared numerous pupils for both GCSE and A Level exams. She was headteacher of a complementary school for five years. She has also taught Chinese as a Modern Foreign Language in independent schools to both native and non-native learners for over ten years. Eileen co-authored the GCSE Chinese Revision Guide (in two versions: Cantonese/traditional script Chinese, and Mandarin/simplified script Chinese) in 2004. She co-authored Curriculum Guide for Chinese in 2007 and its Cantonese version in 2009 published by CILT. She is the chief editor of and co-authored all of the eight books in the Let’s Learn Chinese series (from beginner level to GCSE), as well as the GCSE Revision Exercise Book, AS and A2 Revision Exercise Books, all published by the UK Federation of Chinese Schools (UKFCS). She was the President of the UKFCS between 2002 and 2005, and has been serving on its Education Committee since 1993. Eileen received an Award from the National Association for Teaching English and Community Languages to Adults in the year 2011-2012 in the category of ‘community language teacher who has made a positive contribution to their organisation through sharing their practice, eg teaching ideas, materials and approaches’. She has been Education Adviser to the UKFCS since 2014. Eileen was an external examiner of the GCSE (2009 specification) Chinese Paper for Speaking. She was also a moderator and team leader of the GCSE (2012 specification) Chinese Paper for Speaking until 2008. Eileen is a regular presenter and trainer in workshops run by the UKFCS either at its annual conferences or to teachers of its member schools in the UK. 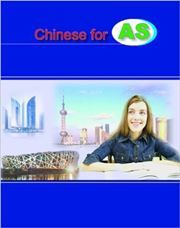