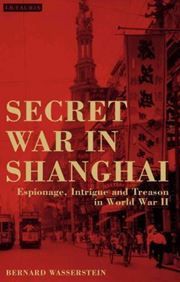 Details
In this classic account, Bernard Wasserstein draws on the files of the Shanghai Police as well as the intelligence archives of the many countries involved, to provide the definitive story of Shanghai's secret war. Bernard Wasserstein introduces the British, American and Australian individuals who collaborated with the Axis powers as well as subversive warfare operatives battling the Japanese - and one another. At times both shocking and amusing, this book lifts the lid on the bizarre underworld of the 'sin city of the Orient' during its most enthralling period in history.
About Author
Bernard Wasserstein is emeritus professor of history at the University of Chicago. His many books include The Secret Lives of Trebitsch Lincoln which was awarded the Golden Dagger for non-fiction by the Crime Writers Association.