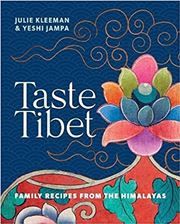 Details
One of the most exciting aspects about being in the food and cooking world for over six decades is the discovery of Taste Tibet. The book is an insight into a culture and its cuisine that is little known. It brings a once exotic destination into our lives and kitchens. A true culinary tasty delight! - Ken Hom, OBE - Chef, author and broadcaster


'Julie and Yeshi have put together a book that captivates you right from the beginning. The images of the country and the food alongside so many wonderful explanations engross you completely. The recipes I have tried are sublime and I cannot wait to cook literally everything in it.”' - Joudie Kalla, author of the cookbook Palestine on a Plate: Memories from my mother's kitchen


'It is incredibly rare that a book arrives explaining and celebrating such a fascinating cuisine in such an engaging way. Every food lover will want this on their shelves between the great international cookbooks.' - Tim Hayward, food writer and author of Knife


This ground-breaking deep dive into Tibetan food is an amazing exploration of a cuisine which is relatively unknown, by Oxford-based author Julie Kleeman and Tibetan chef Yeshi Jampa. Taste Tibet is perfect for cooks who like to eat the world from cookbooks such as Chinese Takeaway Cookbook, Dishoom, Parwana and Made in India.

Nourishing, simple, seasonal food that heals as well as fuels: this way of eating might be popular today, but it has been traditional in Tibet for over 8,000 years. Taste Tibet is a collection of over 80 recipes from the Tibetan Plateau written for today's home cook. Create comforting soups and stews, learn the secrets of hand-pulled noodles, and everything you need to know about making and eating momo dumplings, Tibet's most legendary and addictive culinary export. Alongside the recipes, award-winning food writer Julie Kleeman and Tibetan cook Yeshi Jampa, who run the Taste Tibet restaurant and food stall in Oxford, interweave stories of Yeshi's childhood in Tibet, and the shared love of food that brought them together. They reveal nomadic Himalayan food culture and practices, including mindful eating and communal cooking - a way of life that celebrates family, togetherness and respect for food - while exploring the relationship between landscape and diet, evoking the simple, subtle and unique flavours of Tibet.
About Author
Julie Kleeman studied Chinese at Cambridge University and has been travelling and eating in Asia since 1992. She lived in Beijing for many years, where she worked as the Chief Editor of the Oxford Chinese Dictionary. Yeshi Jampa grew up in Tibet, herding livestock on the high reaches of the plateau and learning to cook inside a yak hair tent at a young age. When he was nineteen, Yeshi walked across the Himalayas to northern India, where he and Julie later met. Yeshi's soups and stir-fries won Julie's heart, and they are now married with two children and living in Oxford, UK. Together, they own and run the Taste Tibet restaurant and festival food stall, a Guardian and BBC Good Food Top Ten pick, and a finalist in the Best Street Food or Takeaway category in the 2021 BBC Food and Farming Awards. Julie and Yeshi share a passion for food and wellbeing, and have made it their mission to get Tibet on the global food map.