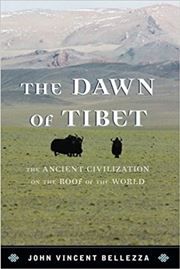 The Dawn of Tibet: The Ancient Civilization on the Roof of the World

Details
This unique book reveals the existence of an advanced civilization where none was known before, presenting an entirely new perspective on the culture and history of Tibet. In his groundbreaking study of an epic period in Tibet few people even knew existed, John Vincent Bellezza details the discovery of an ancient people on the most desolate reaches of the Tibetan plateau, revolutionizing our ideas about who Tibetans really are. While many associate Tibet with Buddhism, it was also once a land of warriors and chariots, whose burials included megalithic arrays and golden masks. This first Tibetan civilization, known as Zhang Zhung, was a cosmopolitan one with links extending across Eurasia, bringing it in line with many of the major cultural innovations of the Late Bronze Age and Iron Age. Based on decades of research, The Dawn of Tibet draws on a rich trove of archaeological, textual, and ethnographic materials collected and analyzed by the author. Bellezza describes the vast network of castles, temples, megaliths, necropolises, and rock art established on the highest and now depopulated part of the Tibetan plateau. He relates literary tales of priests and priestesses, horned deities, and the celestial afterlife to the actual archaeological evidence, providing a fascinating perspective on the origins and development of civilization. The story builds to the present by following the colorful culture of the herders of Upper Tibet, an ancient people whose way of life is endangered by modern development. Tracing Bellezza's epic journeys across lands where few Westerners have ventured, this book provides a compelling window into the most inaccessible reaches of Tibet and a civilization that flourished long before Buddhism took root.
About Author
Assistant Professor Li Jiangshan has a doctorate degree in Acupuncture, Moxibustion and Tuina. He is the assistant director of the Tuina Committee of the Hunan Province TCM Association and a member of the Tuina Committee of the Chinese Medical Association. His primary research focus is 'Research on the Physiological Effect of Tuina Manipulations' and 'Clinical Research on the Prevention and Treatment of Sub-Health Conditions with Tuina'. He has been awarded six provincial second and third place awards for Science and Technology Advancement. Assistant Editors: Li Tielang and Zhou Guoping Editorial Committee: Ai Kun, Peng Liang, and Liu Qiong