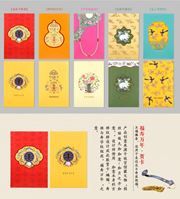 Details
Established in 1925, the Palace Museum is located in the imperial palace of the consecutive Ming (1368-1644) and Qing (1644-1911) dynasties. The magnificent architectural complex, also known as the Forbidden City, and the vast holdings of paintings, calligraphy, ceramics, and antiquities of the imperial collections make it one of the most prestigious museums in China and the world. In 1961, the State Council designated the former imperial residence as one of China's foremost-protected cultural heritage sites, and in 1987 it was listed as a UNESCO World Heritage site.

The patterns on these 14 x 10 cm greeting cards depict from the exclusive museum collections. Send your beloved ones these cute cards.

*Design will be randomly sent for all online orders.