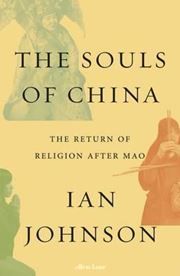 The Souls of China: The Return of Religion After Mao

Details
Masterfully opens up a little explored realm: how the quest for religion and spirituality drives hundreds of millions of Chinese' Pankaj Mishra 'A fascinating odyssey ...a nuanced group portrait of Chinese citizens striving for non-material answers in an era of frenetic materialism' Julia Lovell, Guardian 'The reappearance and flourishing of religion is perhaps the most surprising aspect of the dramatic changes in China in recent decades...this is a beautiful, moving and insightful book' Michael Szonyi In no society on Earth was there such a ferocious attempt to eradicate all trace of religion as in modern China. But now, following a century of violent antireligious campaigns, China is awash with new temples, churches, and mosques - as well as cults, sects, and politicians trying to harness religion for their own ends. Driving this explosion of faith is uncertainty - over what it means to be Chinese, and how to live an ethical life in a country that discarded traditional morality and is still searching for new guideposts. The Souls of China is the result of some fifteen years of studying and travelling around China.The message of Ian Johnson's extraordinary book is that China is now experiencing a 'Great Awakening' on a vast scale. Everywhere long-suppressed religions are rebuilding, often in new forms, and reshaping the values and behaviours of entire communities. Ian Johnson is as happy explaining the wonders of the lunar calendar as talking to the yinyang man who ensures proper burials. He visits meditation masters and the charismatic head of a Chengdu church. The result is a rich and funny work that challenges conventional wisdom about China. Xi Jinping, China's current leader, has put a return to morality and Chinese tradition at the heart of his ideas for his country - but, Johnson asks, at what point will the rapid spread of belief form an unmanageable challenge to the Party's monopoly on power?
About Author
Ian Johnson is a Pulitzer Prize winning correspondent for The New York Times and The New York Review of Books. He has spent about half of the past thirty years in China, first as a student and then as a correspondent. He is also an advising editor for The Journal of Asian Studies and teaches on religion in China. He is the author of two other books that also focus on the intersection of politics and religion: Wild Grass: Three Stories of Change in China, and A Mosque in Munich: Nazis, the CIA, and the Rise of the Muslim Brotherhood in the West. He splits his time between Beijing and Berlin.