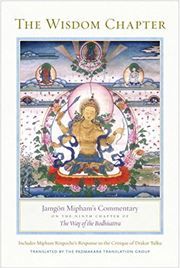 The Wisdom Chapter: Jamgon Mipham's Commentary on the Ninth Chapter of the Way of the Bodhisattva

Details
The Way of the Bodhisattva is one of the most important texts in the Tibetan tradition, a core guide beloved by all the schools, which takes the reader through the training in the Bodhisattva path. The ninth chapter, however, is regarded as difficult because it deals with Madhyamaka, the Middle Way, the most profound wisdom view of Mahayana Buddhism. Mipham Rinpoche's commentary is an exposition and defense of the interpretation of the ninth chapter according to the Older Tradition (Nyingma, Sakya, and Kagyu) of Tibetan Buddhism. Mipham explains how the view presented by Shantideva is in fact the view of Dzogchen. It stirred up a furious debate in Tibet because it took issue with the interpretation by the New Tradition (Gelugpa) that was religiously and politically dominant at that time. That debate is captured beautifully here as this volume includes a critique of Mipham Rinpoche's view by a prominent Gelugpa tulku as well as Mipham's response.
About Author
JAMGON MIPHAM (1846-1912) displayed a universal genius as he wrote on all aspects of Buddhist theory and practice, as well as on the traditional sciences. He is one of the most influential figures to come out of the Tibetan tradition in recent centuries. SHANTIDEVA (eighth century) was a Buddhist scholar and contemplative who was a member of the monastic Nalanda university, which was one of the most celebrated centers of learning in ancient India. The PADMAKARA TRANSLATION GROUP, based in France, has a distinguished reputation for all its translations of Tibetan texts and teachings. Its work has been published in several languages and is renowned for its clear and accurate literary style.