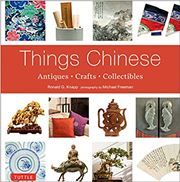 Details
China's art objects and traditional manufactured products have long been sought by collectors from porcelains and silk fabrics to furniture and even the lacquered chopsticks that are a distant relation to ones found in most Chinese restaurants. Things Chinese presents sixty distinctive items that are typical of Chinese culture and together open a special window onto the people, history, and society of the world's largest nation. Many of the objects are collectibles, and each has a story to tell. The objects relate to six major areas of cultural life: the home, the personal, arts and crafts, eating and drinking, entertainment, and religious practice. They include items both familiar and unfamiliar from snuff bottles and calligraphy scrolls to moon cake moulds and Mao memorabilia. Ronald Knapp's evocative text describes the history, cultural significance, and customs relating to each object, while Michael Freeman's superb photographs illustrate them. Together, text and photographs offer a unique look at the material culture of China and the aesthetics that inform it.
About Author
Ronald G. Knapp has been carrying out field research in China's countryside on cultural and historical geography since 1965. Currently SUNY Distinguished Professor Emeritus at the State University of New York, New Paltz, he is the author or editor of more than a dozen books, including, most recently, Chinese Houses of Southeast Asia: The Eclectic Architecture of Sojourners and Settlers and Chinese Bridges: Living Architecture from China's Past; and Chinese Houses: The Architectural Heritage of a Nation. He is co-editor with Kai-Yin Lo of House Home Family: Living and Being Chinese. Michael Freeman specializes in reportage and in modern design and architecture. One of Smithsonian magazine's principal photographers for more than three decades, he has photographed extensively in Asia and has produced 117 books. Among these are Angkor: The Hidden Glories ('A remarkable book, a superb evocation.' Wall Street Journal); the award-winning Japan Modern; Things Japanese; Things Thai; Spirit of Asia; In the Oriental Style; and China Contemporary, among many others. Freeman's books on photography are international bestsellers, with two million copies sold, and have been published in twenty languages.